What a crazy weekend!!

This was a huge milestone for us, we were registered to run THREE races back to back! How exciting!

The medals are amazing, the swag is awesome and the perks for this run promised to make it a memorable one.

What could go wrong?

Boy were we surprised to see there was nothing set up for the expo, not one vendor! To make matters worse, the table for package pick up had no one manning it. After waiting there for several minutes someone finally appeared and gave us our kits.

I Loved the Jacket and the weekend bag!

Very disappointed about the expo, we headed to check into our hotel, hoping the weather was the problem and that tomorrow would be better.

We stayed at the Hyatt Place Chicago. The hotel was about 45 min to the run site. It was a great price, free Wi-Fi, free parking and free breakfast…the three F’s I always look for in a hotel.

The next morning we were up early and prepared for a fun filled day!

The rain had slowed down but hadn’t stopped completely, we got ready at a steady pace and then jumped in the car to head to the run…

When we got into the car we realized we were late. The clock in the car said we were almost an hour later than we wanted to be leaving! What the hell?? How did it take us that long to get ready??

I drove as fast as I could thinking we could get there in time for at least our second race.

The rain had made the roads full of puddles, which made driving at high speeds very tricky! Not to mention on our way our cell phones were flashing us flood warnings!

When we arrived at the run site there was hardly anyone there…Which really confused us, because we read online before the race, that parking fills up quickly and to arrive early. Here we are arriving 20 min late and the parking lot is not even half full.

Finally after some careful thought and complete confusion, Laurie jumps out of the car and asks a fellow runner,

“What time zone are we in?”

Ok… in our defense, who would have thought that Chicago, only a few hours away, would be in a different time zone?? Defiantly not us!

Oh well…after some big belly laughs about how crazy I drove to get us there on time, we were glad to be there early.

The rain was still hanging on and the wind was very cold, but we headed to the start line to join the rest of our fellow runners.

At the start line we are told that there has been a change in plans…unfortunately they were unable to get a permit from the city to hold all three races! So instead they are only offering the 10K distance but will track our progress to each distance as if we ran all three races and therefore still receive all four medals!

This was a HUGE disappointment. It felt like we got ripped off. I liked that we still received all four medals but I was very disappointed to not be able to do all three races. Listening to the other women around me, I could tell I wasn’t the only one who was disappointed.

We didn’t let this get us down, we were in Chicago, and we were about to run…maybe not as far as we thought but still we were here and about to run along the waterfront in Chicago…That’s pretty freaking awesome!

The run started out ok…a light jog, nothing crazy. There were no corrals, so the beginning is always pretty slow and congested. As the run went on, we became a little more spread out.

The route was beautiful (even in the rain). We ran along the water with waves splashing against the rocks we could see a stunning view of downtown Chicago in the background.

At about the 8 KM mark, I ran into some serious trouble….my legs started to cramp! This has never happened to me before and the pain was so bad that it made me stop dead in my tracks. I told Laurie to keep going and I would catch up, I had to get the cramp out before I could keep going.

After stretching my leg for a few minutes, the cramp seemed to disappear and I continued my run. I could see Laurie’s pink jacket and she wasn’t too far ahead of me. I knew I could catch up if I just stayed a steady pace.

At 9 KM it happened again, but this time it was BOTH legs at the same time. The pain put me flat on the ground. Knowing I still had another kilometer to go and still hadn’t caught up to Laurie, I was determined to finish this race! I made it to my feet and stretched out my calves the best I could, grit my teeth and continued.

It was like I was paralyzed! The pain was excruciating!

Unable to hold back my tears, I started screaming.

Fellow runners stopped to help me, but nothing seemed to work!

Finally I said to myself…

“Carm, Laurie is probably finished by now, and no one is here to carry your sorry ass across that line, so get up and get moving!”

Every step was a struggle…with each step my calf muscles cramped.

I would try to run, jog or walk faster but no matter what I did, my legs ripped in pain.

Finally I could see the finish line….I know it was now or never…

I did it…BALLS TO THE WALL….ran/hopped as hard as I possible could (which wasn’t very fast) and crossed that finish line! and collapsed! How EMBARRASSING!

I was a screaming and crying mess at the finish line!

Fellow runners came to my aid and carried me to the medical tent, where nurses massaged my calves until they stopped spasming.

Laurie found me after another runner told her I was in the medical tent. (Good thing we were wearing matching pants!)

Finally after lots of water and calf massages, I was feeling much better and looking forward to enjoying the festivities and relishing in my accomplishment.

We were supposed to receive our medals by “hot” models, but I was in such a state of pain, I didn’t get my medal from them, so Laurie rounded up a few for me so I could get my picture with them 🙂

Side Story: When Laurie and I were looking for the models….I said out loud…

”Where are the hot guys?”

When we turned to look, it was the cutie manning the booth behind us and he was pointing to himself! … LOL…we had to take our picture with him of course! 🙂

After, we headed inside for our free glass of champagne, only to find out that they ran out of glasses and are now offering champagne in a Dixie cup instead. 😦 We decided against waiting in a huge line for a sip of champagne and headed back to our hotel.

The Good, The Bad and The Ugly…

Final words about this run:

As long as you are with your friend, you will have a good time no matter what!

ALWAYS CHECK WHAT TIME ZONES YOU ARE IN!!! 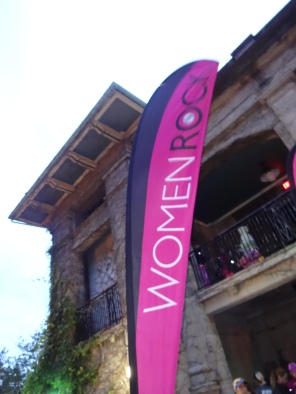 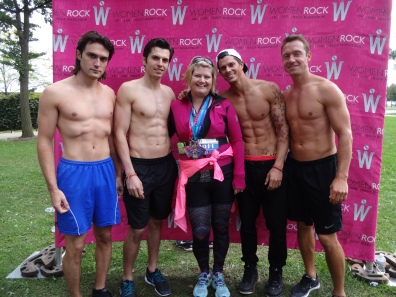 Hot Guys at the end

The glass…they ran out so we didn’t get one, but I got a picture of it. 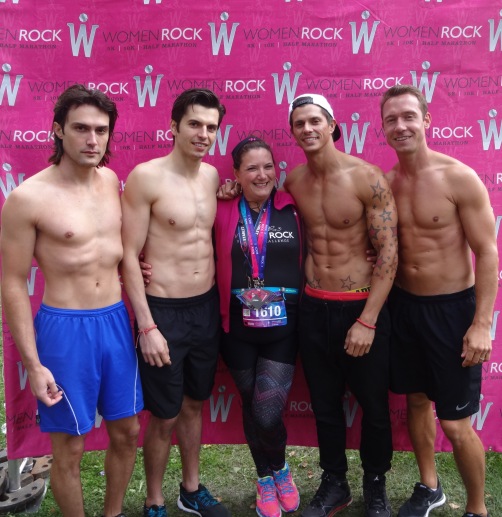 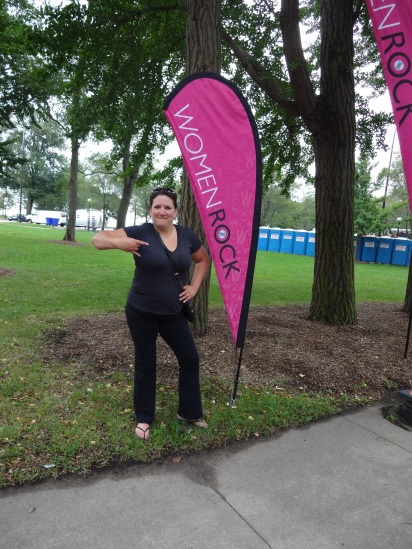 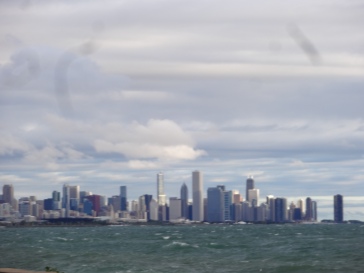 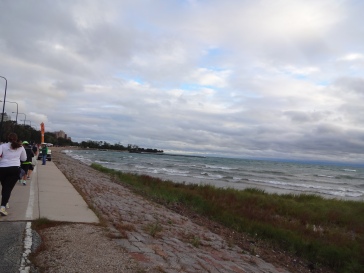 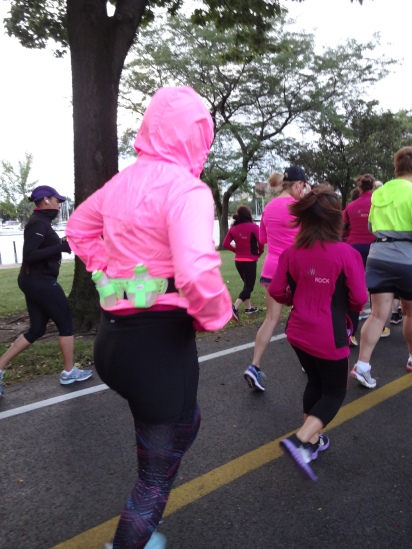 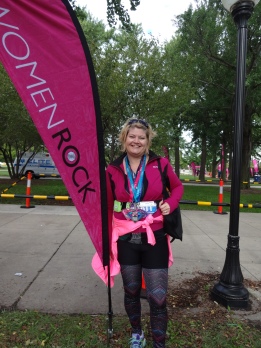 “Where are the hot guys?” “Right here” 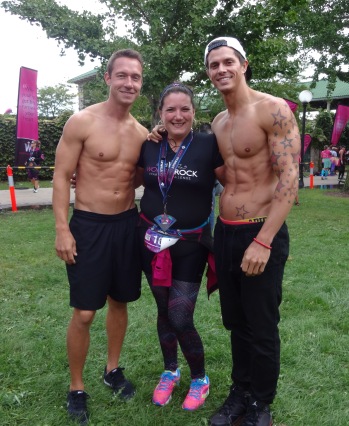 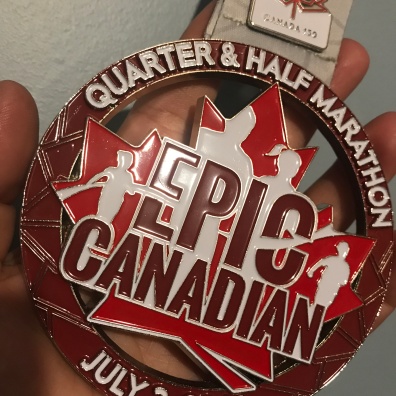 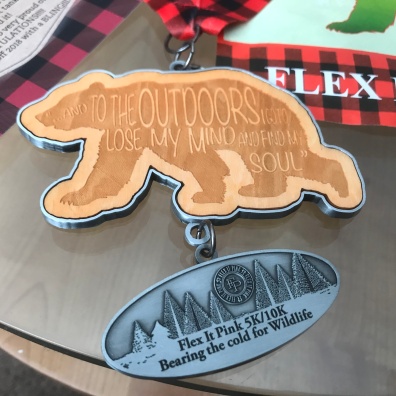